Six o’clock in the morning. The morning!

Ramblings of a Born Again Cyclist

Hello, I’m Clyde and I live in Matlock. I’m a supporter of Peak Cycle Links and I work for Sustrans as a volunteer ‘Ranger’. As a ‘Born Again Cyclist’ returning to the saddle at the tender age of 49, I quickly found that my love of travel by this means of transport had not been diminished by more than 30 years of motorcycling and car-driving. This is easily the best way to enjoy your surroundings: in a day you cover more distance and you see more than you do walking, while the lower speeds than those of motoring enable you to stop and explore whenever and wherever you want. It’s good for you, it doesn’t wreck the planet and it costs next to nothing. And it’s just bloody good fun.

I’ve never been a fast rider. I went youth hostelling in 1963, just after I’d done my 'O' levels, with a couple of mates from Croydon to Cornwall and back – 600 miles over 10 days – and they always had to stop to wait for me every so often. But, given the whole day, I never had a problem with the distances: since the age of 60 I’ve done over 100 miles in a day six times. I’m now 70 and since 2009 I have gone touring every year with a group of lads from Derbyshire and Nottinghamshire, to various areas of the British Isles, France and Holland – and I’m still the one at the back. This is never a problem and, anyway, most of my riding I do alone; I’m quite fond of my own company.

My wife Sylvie and I have a place in France and we spend several weeks of the year on the other side of the Channel. Of course I keep a bike there, so I cover quite a lot of distance cycling in France. My bikes in Matlock and in France are both hybrids: basically mountain bikes with road tyres and mudguards. Wherever possible I like to ride on traffic-free greenways or multi-user paths but unfortunately these represent a fraction of the available space for cyclists. Since retirement, nearly 11 years ago (blimey, can it really be that long?) I set myself a couple of targets: one was to cover at least 100 km a week, either in several short journeys or in one long one. So 5200 km a year – that’s not unreasonable. The other is to cover as much of the National Cycle Network while I still can. It’s currently 14000 miles and still growing – I’m not sure I can keep up with it.

In a series of articles I will be describing some of my more memorable rides in the UK and abroad. I hope to inspire and enthuse others to get on their bikes and head for the hills. And, wherever possible, to ride on designated cycle routes. I’m not expecting that these will be in any particular order and I’ll start with some of my most recent rides.

So watch this space – and happy riding.

Europe After Rain. And hail. And wind. But mainly snow.

Eighteen months ago Gill and I set off from sunny Buxton to cycle to supposedly sunny Cadiz. Bearing in mind that we get a bit giddy when we have to take a layer off in Whaley Bridge, it's fair to say that we were quite excited. Except that when we actually threw a leg over the crossbar and turned the pedals for the first of the 12,345,678 revolutions (approximately) we had to stop at the end of our road to put our rain jackets on. Derbyshire was not being kind to us in late September 2016.

We needn't have worried though, as our plan worked perfectly. The plan being to follow the sun down through France and Spain as the autumn progressed into winter, then maybe even migrate back north via the Portuguese coast as winter turned to spring, across northern Spain as our money ran out then... well, we didn't want to ruin the trip with too much detail so we thought we'd just wing it from there.
Seven miles out of Buxton we got on the White Peak Loop and headed south - now that's an idea PCL, why don't we extend it all the way to the Mediterranean? Madrid? OK, maybe just Matlock.
By Tissington it was pissington down. I met an old man coming out of the toilets who made the mistake of enquiring where we were heading with all that clobber (I was towing a trailer as well as porting two rear panniers, a tent on the back rack and a big bulky sleeping bag on the front rack, plus handlebar bag. Gill was grinning and bearing a grudge.
I looked off into the middle distance, adopted a world-weary expression and, with a knowingly irritating high rising terminal, question/replied: "Cadiz?"
I so wish he'd replied: "Well you're going the wrong way you twat." and pointed me towards Reykjavik. But he was too polite and just zipped up his pants without even looking, which made me wince but he seemed to know what he was doing.

I lied to that old man. We never got to Cadiz. We made it as far as Mallorca for Christmas, when the rest of the family flew out to join us. But whilst we were all grumping about the hotel dodging the four solid days of rain (the most by far we'd seen in our entire 2000 mile journey since leaving England) Gill got word (well, email) that she'd secured her cycle training work contract and had to be back in the saddle (but the metaphorical one) in the new year.

And so that was that - our intended 5 month epic was abridged to only 3 months. It had been such a wonderfully liberating experience though that we vowed to do it again as soon as our respective employers would allow us the time. Mine were almost unseemly in their haste to see me gone again. Irreplaceable Gill didn't know what she would do until I reminded her that the graveyard was full of irreplaceable men. We agreed that that probably applied to women too and so she got a replacement in.

Being summer we plan to head north and have booked the ferry from Hull to Rotterdam. We intend to go as far as we can before having to come back - what could go wrong? Tune in again to find out.

Six o’clock in the morning. The morning! 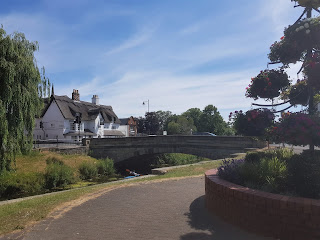